The 2 Slices toaster is made of plastic and there is a gloss finish main body. The Russell Hobbs 21410 Mode model can toast up to two slices of bread at a time and there is a cord storage to keep your worktop neat and tidy.

A cancel function lets you to stop the cycle mid-way to prevent accidental burning and it consists of two slots. It comes with wide slots so you can toast crumpets, bagels and thickly sliced bread easily and this russell hobbs toaster has a black colour. High lift function for the easy removal of small slices.

Additionally, there is a variable browning control feature, so you can make toast just the way you like it. This toaster features a frozen setting will quickly defrost bread straight from the freezer and you don't have to worry about getting to the toaster before it cools using the reheat function. It comes with illuminated controls and the russell hobbs toaster has 2 years warranty.

Cleaning up is made simple and easy thanks to the detachable crumb tray.

View the best toasters made by Russell Hobbs.

What should your consider when deciding to buy the Russell Hobbs toaster?

If you are considering buying the Russell Hobbs toaster you should consider the following:

In this section, we have compared the prices for Russell Hobbs 21410 available for sale on the following online retailers.

You can compare this toaster price with similar Russell Hobbs toasters with 2 Slices in the table below:

There are various Russell Hobbs toasters that cost less than this 21410 toaster that you could consider, but the cheapest model is the Russell Hobbs 18800 2 slices black plastic toaster costing £11.99 (last checked on 4 December 2019).

If you are looking to buy the 21410 online, then check these stockists websites below:

In this section, you can compare the 21410 toaster ratings.

The following table shows the ratings for 21410 , including feature name, rating and review:

This table lists the 21410 ratings found on these online sites listed below:

robertdyas.co.uk🗗 website users rate the 21410 as a very good toaster.

coop.co.uk🗗 website users rate the 21410 as a poor toaster.

Here you can view the Russell Hobbs toaster full specification list of features.

Compare the 21410 with the best toaster models with similar features.

This toaster has an overall rating of 4.1 out of 5 stars. 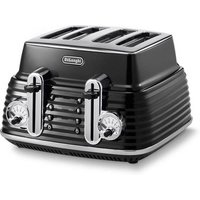