This chart shows the ratings for Morphy Richards 222004 toaster including, features, functions, design, safety, ease of use, price and users ratings.

It features removable crumb trays for easy cleaning and with its sleek matte finish, the morphy richards 222004 toaster will make a stylish addition to any kitchen. A cancel function allows you to stop the cycle mid-way to prevent accidental burning.

In addition, it is made of stainless steel. The 2 Slices toaster has cool touch design for safety and if your toast has popped up and gone cold, the toaster offers a re-heat facility. The 222004 appliance features 2 slots.

It can heat 2 slices at once. The toaster comes with a defrost function that allows you to toast bread directly from frozen and the morphy richards toaster has cord storage for a clutter-free kitchen counter. The variable browning control allows you to make your toast how you like it.

It also comes with a High-lift function for easy removal of smaller slices of bread. The toaster comes with a practical removable crumb tray that is incorporated into the toaster and makes maintaining and cleaning the device simple and it has a modern style. There are LED toasting controls.

It also has variable width slots ensure your toast is even, whether your slice is thick or thin. The toaster has 850 watts power output and in addition, you can enjoy every manner of toasted treats, from bagels to pitta bread with this toaster's wide slots.

View the best toasters made by Morphy Richards.

What should your consider when deciding to buy the Morphy Richards toaster?

If you are considering buying the 222004 you should consider the following:

In this section, we have compared the prices for Morphy Richards 222004 available for sale on the following online retailers.

You can compare this toaster price with similar Morphy Richards toasters with 2 Slices in the table below:

There are various Morphy Richards toasters that cost less than this 222004 that you could consider, but the cheapest model is the Morphy Richards Accents 2 Slice Toaster 44265 White costing £12.99 (last checked on 4 December 2019).

If you are looking to buy the Morphy Richards 222004 online, then check these stockists websites below:

In this section, you can compare the Morphy Richards toaster ratings.

The following table shows the ratings for Morphy Richards toaster, including feature name, rating and review:

This table lists the Morphy Richards toaster ratings found on these online sites listed below:

Here you can view the 222004 full specification list of features.

This table consists of 222004 feature names and feature values.

Compare the 222004 toaster with the best toaster models with similar features.

This toaster has an overall rating of 4.4 out of 5 stars. 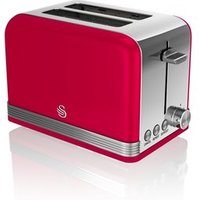