In this article, we review Sabichi 189097 and Tefal TT60540 toasters. We also compare both toasters features, stockists, prices, ratings, and compare the models features in a table. Finally, we also provide our verdict for both toasters models and possible alternative Sabichi and Tefal toasters.

This model has a High lift function which makes it easy to remove your toast and the 189097 appliance has 2 slices capacity, ideal for a couple or a small family. The Cancel button will immediately interrupt the toasting cycle and slide the toast up and a removable crumb tray make cleaning and maintenance easy.

It also comes with variable browning control – so you can get your perfect slice every time.

It comes with 4 slices capacity, allowing you to toast 4 slices at once and adjustable shade control with several shade settings which regulates browning of the toast. Additionally, this model has a mid cycle cancel function allowing you to cancel your toasting mid cycle if you're in a hurry.

The wide slots used for toasting large slices of bread. A removable crumb tray is great to make it easy to clean and in addition, there is a setting for frozen bread so you can get bread slices straight from out of the freezer and into the tt60540 toaster. High lift function for the easy removal of small slices.

In addition, this model has a reheat feature that warms toast that has cooled, without extra browning.

In this section, we have compared the prices for both toasters, Sabichi 189097 and Tefal TT60540.

If you are looking for online stores/stockists, that sell Sabichi 189097 and Tefal TT60540 toasters, then we recommend the stockists listed below.

The following table shows the ratings for Sabichi 189097, including feature name, rating and review:

The following table shows the ratings for Tefal TT60540, including feature name, rating and review:

This table shows user ratings for Tefal TT60540 on the following online websites. This is useful so you can compare our ratings against online users ratings. It includes the toaster name/model and website name (with a link to website rating details), review, price when checked and rating (0 to 5 stars).

The Sabichi 189097 toaster has 2 slices capacity, white colour, variable browning control, cancel function and the cheapest price is £8.99 at hughes. It also has high lift facility. 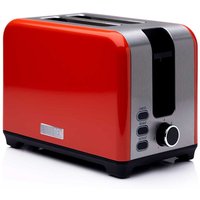