The reheat function will warm the toast without leaving it soggy or burning the bread and a removable crumb tray that helps prevent debris from spilling out onto your benchtop. By offering variable browning control, the 4 Slices toaster ensures you get the perfect toast every time, cooked just to your liking and the 24412 has a defrost function which helps to thaw bread quickly.

Wide slots can toast the thickest bread slices and it also has cord storage. There is a High rise mechanism for smaller items to prevent them from getting trapped inside and the independent slots allows you to use just two slots at a time, choose different settings for each pair of slots. The Cancel setting allows you to stop bread from toasting mid-cycle.

It also features cool touch walls. This appliance has the capacity to make up to four of toast at a time.

The 2 Slices toaster has a high lift facility and the 222060 is made of stainless steel. It also comes with cool touch housing for extra safety.

The toaster offers a re-heat facility that can be used if your toast has popped up and gone cold. The 2 Slices toaster comes with a defrost function that thaws bread quickly and it can heat 2 slices at once. The browning control regulates the colour of the toast.

The 222060 toaster has cord storage to keep your worktop neat and tidy. The toaster comes with a Mid cycle cancel function and the variable width slots increase your choice of bread shapes and sizes.

In this section, we have compared the prices for both toasters, Russell Hobbs 24412 and Morphy Richards 222060.

If you are looking for online stores/stockists, that sell Russell Hobbs 24412 and Morphy Richards 222060 toasters, then we recommend the stockists listed below.

The following table shows the ratings for Russell Hobbs 24412, including feature name, rating and review:

The following table shows the ratings for Morphy Richards 222060, including feature name, rating and review: 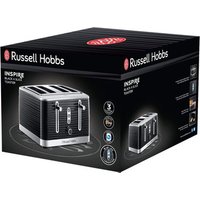