The 297T12P has 1 year warranty and by offering variable browning control, the 297t12p ensures you get the perfect toast every time, cooked just to your liking.

The Removable crumb tray lets you easily clean your toaster and a cancel button so you can pop up your toast whenever you want. In addition, it is made of stainless steel and variable browning control - allows you to set the browning of your toast so you can have your toast just the way you like it.

This two slice toaster is ideal for smaller kitchens and the tat6a913gb toaster comes with a defrost function that thaws bread quickly. Self-centering slots lets you accommodate thick sided bread.

In this section, we have compared the prices for both toasters, Prince Castle 297T12P and Bosch TAT6A913GB.

If you are looking for online stores/stockists, that sell Prince Castle 297T12P and Bosch TAT6A913GB toasters, then we recommend the stockists listed below.

The following table shows the ratings for Prince Castle 297T12P, including feature name, rating and review:

The following table shows the ratings for Bosch TAT6A913GB, including feature name, rating and review:

This table shows user ratings for Bosch TAT6A913GB on the following online websites. This is useful so you can compare our ratings against online users ratings. It includes the toaster name/model and website name (with a link to website rating details), review, price when checked and rating (0 to 5 stars).

The Prince Castle 297T12P toaster comes with variable browning control and the cheapest price is £2627.98 at nisbets plc uk. 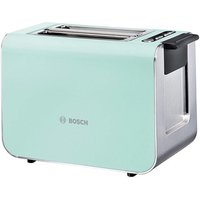