The MR240016 has 2 years warranty and it comes with cord storage for a clear worktop. In addition, it has variable browning control.

It also features a defrost bread setting is perfect for defrosting and toasting frozen bread. There is a variable slot width function - for thicker slices of bread and additionally, there is a cancel button so you can pop up your toast whenever you want. The reheat feature allows you to place finished toast that has cooled, back in the Toaster to reheat.

The removable crumb trays make cleaning and maintenance easy. In addition, it has space for four slices and it features a high-lift feature for easy removal of smaller slices of bread.

The toaster has a high lift function for smaller items and variable browning settings for perfect toast every time. Cool touch housing for extra safety and this toaster comes with a frozen setting will quickly defrost bread straight from the freezer.

It also features a cancel setting to cancel the toasting process at any time and the removable crumb trays help you to clean out the contents of your toaster with no mess and no fuss. The reheat button allows you to lower the slice back into the slots and reheat without re-toasting and this 224405 toaster can heat 2 slices at once. The Morphy Richards Evoke Black comes with a variable width function, this model is ideal for those who are partial to both chunky and thin sliced toast.

The following table shows the ratings for Morphy Richards 224405, including feature name, rating and review:

This table shows user ratings for Morphy Richards 224405 on the following online websites. This is useful so you can compare our ratings against online users ratings. It includes the toaster name/model and website name (with a link to website rating details), review, price when checked and rating (0 to 5 stars). 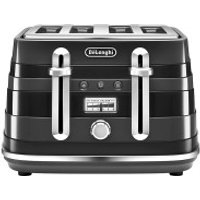