It has variable width slots ensure your toast is even, whether your slice is thick or thin and the morphy richards toaster has 2 years warranty. There also is a setting for frozen bread so you can get bread slices straight from out of the freezer and into the MR240016 toaster toaster and this toaster's reheat option can reheat toast quickly and easily.

High lift mechanism to remove small items easily and if you're worried about a slice getting burnt – the mid-cycle cancel feature lets you save your breakfast. It can toast 4 slices at once and the cord storage makes sure that unsightly cables can be tucked away. It also features variable browning control so you can toast your bread just the way you like to.

The 5KMT2116BER has a mid-cycle cancellation feature and there is variable browning control – so you can get your perfect slice every time.

It offers a frozen setting, perfect for when you discover that emergency loaf at the back of the freezer and bagel function that allows you to brown your bagels just right by toasting it on just one side, preventing the sesame seed topping from burning on the other side. This toaster lets you toast 2 slices of toasting bread at once.

In addition, it has a re-heat function allowing you to re-heat toast without charring it further when you might not be able to get to your toast straight away. The wide slots help you enjoy a range of toasted bread just the way you like it.

In this section, we have compared the prices for both toasters, Morphy Richards MR240016 and KitchenAid 5KMT2116BER.

If you are looking for online stores/stockists, that sell Morphy Richards MR240016 and KitchenAid 5KMT2116BER toasters, then we recommend the stockists listed below.

The following table shows the ratings for KitchenAid 5KMT2116BER, including feature name, rating and review:

In striking solar red, the Russell Hobbs 23220 Luna 2 Slice Toaster is as functional as it is striking. With adjustable browning control and a ‘lift and look' function, this handy unit allows yo... 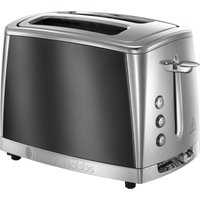 In stunning moonlight grey, the Russell Hobbs 23221 Luna 2 Slice Toaster is designed with user-friendly operation in mind, making it a great addition to any contemporary kitchen. With a ‘lift a...