The removable crumb trays are great to keep messy crumbs at bay and it comes with variable browning control so you can toast your bread just the way you like to.

It also is ideal to toast 4 slices at once, for all the family and for extra safety, it comes with cool touch walls. The cord-storage facility of the 4 Slices toaster keeps your worktop tidy.

This toaster also features variable width toasting slots. If your toast has popped up and gone cold, the 242104 offers a re-heat facility and there is a cancel function that allows you to stop the cycle mid-way to prevent accidental burning.

It also features a removable crumb tray for easy cleaning and a high-lift lever helps you remove the smallest items without burning your fingers. The 242104 toaster's defrost function automatically lengthens the toasting time.

Wide Slots: To accommodate thicker slices of bread and this model is a four-slice toaster and is good for families or busy households. It also features a defrost button that makes it easy to defrost items before toasting and the reheat function will heat up toast that has cooled or gone cold.

A Removable crumb tray means it's nice and easy to clean your toaster and the variable browning is ideal so you can enjoy toast exactly as you like it. This toaster has a high lift facility and the cancel button will immediately interrupt the toasting cycle and slide the toast up.

In this section, we have compared the prices for both toasters, Morphy Richards 242104 and Breville VTT788.

If you are looking for online stores/stockists, that sell Morphy Richards 242104 and Breville VTT788 toasters, then we recommend the stockists listed below.

The following table shows the ratings for Breville VTT788, including feature name, rating and review:

This table shows user ratings for Breville VTT788 on the following online websites. This is useful so you can compare our ratings against online users ratings. It includes the toaster name/model and website name (with a link to website rating details), review, price when checked and rating (0 to 5 stars).

The perfect two-slice toaster for bagel lovers, this appliance features a handy bagel slot which will toast the bread only on one side, preventing the seed-coated side from being burnt. The toaster al... 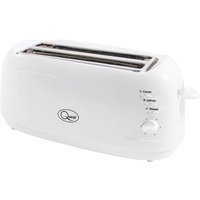 Perfect for families, this 4-slice toaster will have everyone's toast ready all at the same time. The variable browning control allows you to brown your bread just the way you like it, while the froze...