The Dualit toaster has 2 years warranty and the cancel function lets you cancel the toasting process at any time. Also, you can select the browning level to stop over-toasting your bread and it can brown 6 slices at once.

With a removable crumb tray, cleaning is easier, so that you can save time wiping down your counters and in addition, this model boasts a defrost function that allows you to toast bread directly from frozen. It features wide slots with plenty of space for buns and crumpets and it has 6 slots and offers a high output of toasted bread for both the domestic and commercial kitchen.

The 23332 has 2 years warranty and there is a removable crumb tray for easy cleaning.

Additionally, this model has a cancel button so you can pop up your toast whenever you want and the 23332 has wide slots great for thick the slices. The cable-storage facility keeps your worktop tidy.

The 23332 features a defrost function that allows you to toast bread directly from frozen. There is a high-lift feature to make it even easier to remove your freshly toasted food and a useful reheat facility lets you warm up any excess toast you may have prepared.

The adjustable browning control is ideal for achieving the perfect golden colour and this 23332 can toast 2 slices at once.

In this section, we have compared the prices for both toasters, Dualit 60154 and Russell Hobbs 23332.

If you are looking for online stores/stockists, that sell Dualit 60154 and Russell Hobbs 23332 toasters, then we recommend the stockists listed below.

The following table shows the ratings for Russell Hobbs 23332, including feature name, rating and review:

This table shows user ratings for Russell Hobbs 23332 on the following online websites. This is useful so you can compare our ratings against online users ratings. It includes the toaster name/model and website name (with a link to website rating details), review, price when checked and rating (0 to 5 stars). 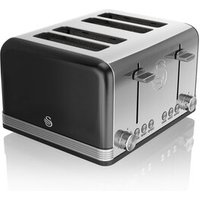