The 41036 is made of stainless steel and it has 4 slices capacity, ideal for a large family. The variable browning choices lets you create toast exactly how you like it and the wide slots used for toasting large slices of bread.

The 41036 appliance allows different slots to toast independently, helping to save energy if fewer slices are required and the toaster boasts a removable crumb tray for easy cleaning. The Dualit 4 Slice has 2 years warranty.

A cancel button so you can pop up your toast whenever you want and it features a defrost bread setting is perfect for defrosting and toasting frozen bread.

Also, this model is a Four-slice toaster and is good for families or busy households and it comes with variable browning controls. The reheat function is ideal for reheating toast without over browning.

Easy to remove trays let you dispose of crumbs easily. You can control how you want each slice done with independent controls.

In this section, we have compared the prices for both toasters, Dualit 41036 and Russell Hobbs 21693.

If you are looking for online stores/stockists, that sell Dualit 41036 and Russell Hobbs 21693 toasters, then we recommend the stockists listed below.

The following table shows the ratings for Dualit 41036, including feature name, rating and review:

The following table shows the ratings for Russell Hobbs 21693, including feature name, rating and review:

The Dualit 41036 toaster comes with 4 slices capacity, stainless steel colour, variable browning control and the cheapest price is £247.18 at nisbets plc uk. It also has wide slots and independent slots. 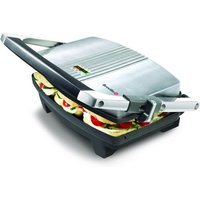 Breville's introduction of toasted sandwich in the 1970s inspired the world, and decades later they continue to inspire us with their innovative thinking and design. The Breville VST025 Cafe-Style San...