You can control how you want each slice done with independent controls and this model can brown four slices at once. Also, this toaster has variable adjustable control, which is ideal for you ensure your toast is browned exactly the way you like it.

The toaster comes with a defrost feature that comes in really handy when you forget to take your bread out of the freezer. There is a reheat function to give your toast a quick blast without going through a whole toasting cycle again and also, this model features a mid cycle cancel function. There is an extra lift position for easy removal of small slices.

The defrost function makes it easy to defrost items before toasting and the morphy richards equip can brown 2 slices at once. The Morphy Richards Equip has a practical removable crumb tray that is incorporated into the toaster and makes maintaining and cleaning the device simple and there is easy cord storage so that your kitchen worktop stays neat and tidy.

In addition, it has variable browning control and this model also has variable width bread slots for thick and thin slices. It comes with cool walls and the reheat function is great if you've ever accidentally left your toast in the slot to go cold. The high-lift feature raises the smallest slices of bread to a high level for easy access and removal when toasting is complete.

If you need to remove the toast before the cycle is complete, you can press the Cancel button.

In this section, we have compared the prices for both toasters, De'Longhi CTOE4003 and Morphy Richards 222053.

If you are looking for online stores/stockists, that sell De'Longhi CTOE4003 and Morphy Richards 222053 toasters, then we recommend the stockists listed below.

The following table shows the ratings for Morphy Richards 222053, including feature name, rating and review:

This table shows user ratings for Morphy Richards 222053 on the following online websites. This is useful so you can compare our ratings against online users ratings. It includes the toaster name/model and website name (with a link to website rating details), review, price when checked and rating (0 to 5 stars). 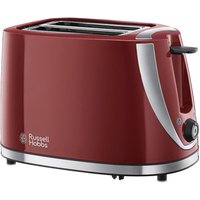