By offering variable browning control, this toaster ensures you get the perfect toast every time, cooked just to your liking and a cancel function allows you to stop the cycle mid-way to prevent accidental burning. The toaster comes with a defrost function that thaws bread quickly.

The reheat function keeps the bread warm until you’re ready to eat. The CTI4003W toaster has 1 year warranty and the bagel feature toasts the bagel on one side only to prevent the seeds from being burnt. This De'Longhi toaster can heat 4 slices at once.

The cord-storage facility keeps your worktop tidy and the morphy richards toaster has a defrost option – which is ideal for those times when need to thaw bread for breakfast. It offers removable crumb trays to keep your kitchen surfaces clean and tidy.

Additionally, there is a Mid cycle cancel function. It has cool touch housing and the variable width slots to toast bread, bagels, crumpets and more. It has a high rise facility.

The capacity to make up to 4 slices of toast at a time. If your toast has popped up and gone cold, this model offers a re-heat facility and variable browning settings for perfect toast every time.

In this section, we have compared the prices for both toasters, De'Longhi CTI4003W and Morphy Richards 248108.

If you are looking for online stores/stockists, that sell De'Longhi CTI4003W and Morphy Richards 248108 toasters, then we recommend the stockists listed below.

The following table shows the ratings for Morphy Richards 248108, including feature name, rating and review:

Designed for the much-loved Warburtons bread, this toaster will brown every bit of the toast so you can say goodbye to the white strip at the top! It also has lots of other handy features to ensure yo... 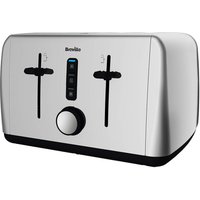 This Breville Stainless Steel Toaster comes in a modern design with a polished stainless steel finish that will effortlessly suit any colour scheme in your kitchen. This is an essential item for your ...