This toaster has a removable crumb tray for easy cleaning and this model boasts variable browning control so you can toast your bread just the way you like to. The toaster has a frozen setting will quickly defrost bread straight from the freezer.

In addition, there is a Bagel setting to warm on one side and toast the other. The high lift function lets you easily remove smaller bread slices safely and the extra wide slots allow you to accommodate bread of various thicknesses. The Cuisinart toaster can brown 2 slices at once.

The cool wall feature means that you won't burn your hands on the exterior while in use. It also has a cancel option which lets you stay in control of the toasting cycle.

This model has a defrost function so you can toast bread straight from the freezer and high lift for easy toast removal.

Also, it is ideal to toast 4 slices at once, for all the family and the morphy richards prism green comes with removable crumb trays which allow you to easily clean your toaster. For extra safety, it comes with cool touch walls.

The toaster has a mid cycle cancel function allowing you to cancel your toasting mid cycle if you're in a hurry. You can ensure that the toast is toasted right each time with the variable browning control and featuring variable width slots, the toaster can handle all manner of items from thin to thickly sliced bread to crumpets, muffins, waffles and bagels.

The reheat feature allows you to place finished toast that has cooled, back in the Toaster to reheat and the cord storage helps keep your worktop tidy.

In this section, we have compared the prices for both toasters, Cuisinart CPT2000BKU and Morphy Richards 248105.

If you are looking for online stores/stockists, that sell Cuisinart CPT2000BKU and Morphy Richards 248105 toasters, then we recommend the stockists listed below.

The following table shows the ratings for Cuisinart CPT2000BKU, including feature name, rating and review:

This table shows user ratings for Cuisinart CPT2000BKU on the following online websites. This is useful so you can compare our ratings against online users ratings. It includes the toaster name/model and website name (with a link to website rating details), review, price when checked and rating (0 to 5 stars).

The following table shows the ratings for Morphy Richards 248105, including feature name, rating and review:

There are some alternative toasters to the CPT2000BKU that you should consider, which have the same main features, including KitchenAid Queen of Hearts 5KMT3115HBSD Toaster, Empire Red (£115) 🗗 and Magimix 2 Slice Vision Toaster 11526 Brushed St/St GN654 (£149.98) 🗗. 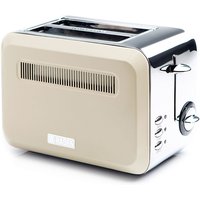