You don't need to worry if you run out of fresh bread, as the defrost function on the toaster will quickly thaw out those spare frozen slices and it has an automatic shut off protection.

The cord-storage facility of the Bosch TAT3A0133G 2 Slice keeps your worktop tidy and it features a high-lift feature for easy removal of smaller slices of bread. A variable browning control for achieving your preferred golden colour.

The toaster features a cool touch design. It has a detachable crumb tray and it has a mid cycle cancel function allowing you to cancel your toasting mid cycle if you're in a hurry.

This TAT3A0133G toaster can heat 2 slices at once and the toaster's automatic bread centring works well to toast every slice evenly.

High-lift function for easy removal of smaller slices of bread and it can brown four slices at once.

There also is a cancel function that lets you cancel the toasting process at any time and removable crumb trays make cleaning a breeze. It comes with cord storage for a clear worktop.

The Morphy Richards toaster comes with a defrost function that thaws bread quickly. The 240102 lets you select your perfect setting for golden brown toast with variable browning and this model's reheat function allows you to reheat your toast right for your breakfast.

The 4 Slices toaster's cool wall feature means that you won't burn your hands on the exterior while in use and there is a variable slot width function - for thicker slices of bread.

In this section, we have compared the prices for both toasters, Bosch TAT3A0133G and Morphy Richards 240102.

If you are looking for online stores/stockists, that sell Bosch TAT3A0133G and Morphy Richards 240102 toasters, then we recommend the stockists listed below.

The following table shows the ratings for Bosch TAT3A0133G, including feature name, rating and review:

This table shows user ratings for Bosch TAT3A0133G on the following online websites. This is useful so you can compare our ratings against online users ratings. It includes the toaster name/model and website name (with a link to website rating details), review, price when checked and rating (0 to 5 stars).

The following table shows the ratings for Morphy Richards 240102, including feature name, rating and review:

Add a splash of style to your toasting endeavours with the Russell Hobbs Futura 2 Slice Toaster. Featuring a stylish brushed and polished stainless steel finish, this kitchen-top appliance brings mode... 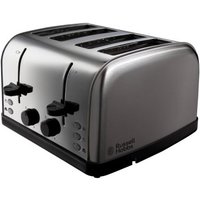 If you like a slice of striking design alongside your slice of toast then this is the appliance for you. The Futura 4 Slice Toaster from iconic housewares brand Russell Hobbs. Featuring a resplendent ...