It comes with cord storage and the tat3a011gb toaster boasts a defrost function that allows you to toast bread directly from frozen. High lift mechanism to remove small items easily.

Also, this toaster has cool touch design. There is a reheat feature, which is handy if your toast pops up before your toasts are ready and bread-centring guide - ensures the bread is toasted evenly on both sides. The mid-cycle cancel feature lets you stop your toast getting burnt.

This two slice toaster is suited for smaller kitchens. The toaster features wide slots to accommodate a thicker cut of bread and it comes with variable browning control ensuring you get perfect toast. The Bosch TAT3A011GB 2 Slice has a practical removable crumb tray that is incorporated into the toaster and makes maintaining and cleaning the device simple.

It has cord storage - unsightly cables can be tucked away and you can remove smaller items without burning your fingers thanks to the extra-high lift which raises the bread carriage for easier access.

The Morphy Richards toaster has removable crumb trays, so it’s really easy to clean afterwards and the variable browning control will ensure that your toast has the correct degree of browning every time. The 4 Slices toaster comes with variable width toasting slots for thick and thin bread.

The MR240016 has 2 years warranty. The 4 Slices toaster has a mid cycle cancel function allowing you to cancel your toasting mid cycle if you're in a hurry and this model has a reheat feature that warms toast that has cooled, without extra browning.

It also comes with 4 slices capacity, allowing you to toast 4 slices at once and this toaster boasts a defrost bread setting is perfect for defrosting and toasting frozen bread.

In this section, we have compared the prices for both toasters, Bosch TAT3A011GB and Morphy Richards MR240016.

If you are looking for online stores/stockists, that sell Bosch TAT3A011GB and Morphy Richards MR240016 toasters, then we recommend the stockists listed below.

The following table shows the ratings for Bosch TAT3A011GB, including feature name, rating and review:

This table shows user ratings for Bosch TAT3A011GB on the following online websites. This is useful so you can compare our ratings against online users ratings. It includes the toaster name/model and website name (with a link to website rating details), review, price when checked and rating (0 to 5 stars).

The Bosch Silicone TAT7S45GB 4-Slice Toaster offers you convenience when preparing breakfast or an easy snack. Don't over-toast your bread - select the browning level for each chamber to get your snac... 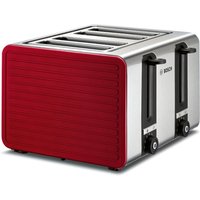 Top features:- Prepare toast for the entire family without the long wait - Easy clean-up thanks to the removable crumb tray - Get an even toast with the automatic bread centering feature Prepare toast...